The Creator's intentions with the sexual energy etc.

(NB: Earlier versions of this text had the somewhat provocative title "Do women want ageing and death?")

Already about 25 years ago I could sense that, on the whole, humans can use the sexual power / the sexual energy in 2 fundamentally different ways - 2 'opposing' ways. This means that both men and women overall can experience 2 fundamentally different types of orgasm. I call them release orgasm and transformation orgasm. It is thus a question of how you perceive and choose to use the sexual energy.

Sexual energy / sexuality is one of the ways the universe's creative power or energy can express itself. We - or more precisely our souls - emerged because God the Father and God Mother had orgasms!

If a person (consciously or unconsciously) identifies himself with his current physical form/body and believes in that idea and all the constraints that this locked form implies, automatically you are stuck in that form, thus creating ageing, diseases, death and memory loss. In that way, your sexual experiences will automatically be characterized by what I call release orgasms, which are characterized by the man having sperm ejaculation, and the woman having ovulation and menstruation.

From a larger spiritual perspective, the problem with this form of orgasm is, that the participants lose their sexual energy, which is emotional energy, ie. our vitality/vigour. In other words, when a man ejaculates, he loses vitality. And when a woman has ovulation and menstruation, she loses vitality. This leads to aging, diseases, death, etc., etc.

The interesting thing is that the opposite also applies: A man can have orgasm without having a sperm ejaculation at the same time, and a woman can have orgasms without ‘needing’ to have ovulations and menstruations! That is the transformation orgasm. But it requires that you consciously have a completely different approach to the sexual energy. Namely, the attitude of accumulating it and letting it accelerate its vibration frequency, whereby it accelerates the vibration frequency of the body and the emotions, whereby your awareness and understanding of yourself and life, etc. expand. And in the end, you transform and heal your body and soul, which become immortal.

So the transformation orgasms occur when you let the (sexual) energy and thus the body and the emotions and your consciousness express themselves, accelerate their vibrational frequency and expand on their own terms, instead of (deliberately or unconsciously) retaining them within the limitations, conditions and judgmental misunderstandings of your mind.

In that case, the orgasm experience spreads to the whole body, and the whole body can shake - almost a bit like an epileptic seizure - and the emotions transform into love and your consciousness and understanding of yourself, life, death, the Creator and the Creation begin to expand. In this way, the sexual energy becomes a driving force in the spiritual and physical development and transformation and healing of the individual and humanity.

So if you want to transform and heal body and soul, in order to realize your full potential and achieve immortality, you choose to experience transformational orgasms instead of release orgasms, and men cease to ejaculate sperm and women cease to have ovulation and menstruation.

Our essence - our soul - has potential for so much more than our current physical form - the human body, with its ageing and death, etc. Our potential is immensely much greater.

When you want to realize that potential, and thereby eliminate ageing, illness, death, memory loss, etc., you choose to accumulate and transform the sexual energy, instead of projecting or wasting it out into ejaculation of semen, ovulation/menstruation and offspring/children. We can always have all the children we may want when we have abolished ageing and death, etc.!

Ultimately, this transformation is both a physical, emotional and spiritual transformation. I try to explain all that in detail in my central text The Transformation - about mankind's situation and possibilities here on my website. If you really want to understand what I am talking about, you have to read that text.

Multiple orgasms - both for men and women!

A man who wants or understands the necessity of spiritual transformation can have multiple transformation orgasms during one sexual intercourse without a single ejaculation. I have experienced it!

It is obvious to me that all women must have the same ability.

The problem for both women and men is that we have a lot of unconscious judgmental and locking misunderstandings, internal conflicts between the intellect and the emotions, blockages, trauma, etc., that prevent the sexual energy from accelerating and expanding and therefore prevent us from easily experiencing this very different form of orgasm. But I do not believe that it's impossible for some, because they lack a so-called "G-spot" or something else.

I feel that sex is a bit like skiing: Sometimes you fall, especially in the beginning or when you meet "new pistes"... :-) The problem is that the way most people have sex corresponds somewhat to skiing with the purpose of falling...!

I explained much of this already in 2008 in the short text Both men and women can experience 2 fundamentally different types of orgasm.

Our most fundamental misunderstandings

Ageing, illness, pain, death, memory loss and reincarnation will disappear once we have discovered, acknowledged and released all the unconscious judgmental and locking misunderstandings that limit us and create all our problems. Psychopaths, violence, war, oppression etc. will, of course, also disappear in the same process.

Since we – humans – have not already abolished ageing and death etc. a long time ago by letting go of misunderstandings, you can logically deduce that we have some very fundamental misunderstandings that we are quite convinced are truths, and that most people seem to rather want to die than having to acknowledge and release those misunderstandings! You might want to “digest” that realization before you read my above mentioned text The Transformation.

I hope it is obvious that this text is a somewhat extraordinary form of contact advertisement. And as such, it should contain my email address –

– and a more or less up-to-date photo of me. The picture below was taken in the autumn of 2017, when I gave the presentation “The Creation of The Universe – The Intentions and the Cause of All The Problems”. I have already discussed this subject in several texts (and Danish videos) here on my website, but in the near future I will probably publish a recording of this lecture here on my website too.

I look forward to hearing from anyone who feels the urge to respond to this text. 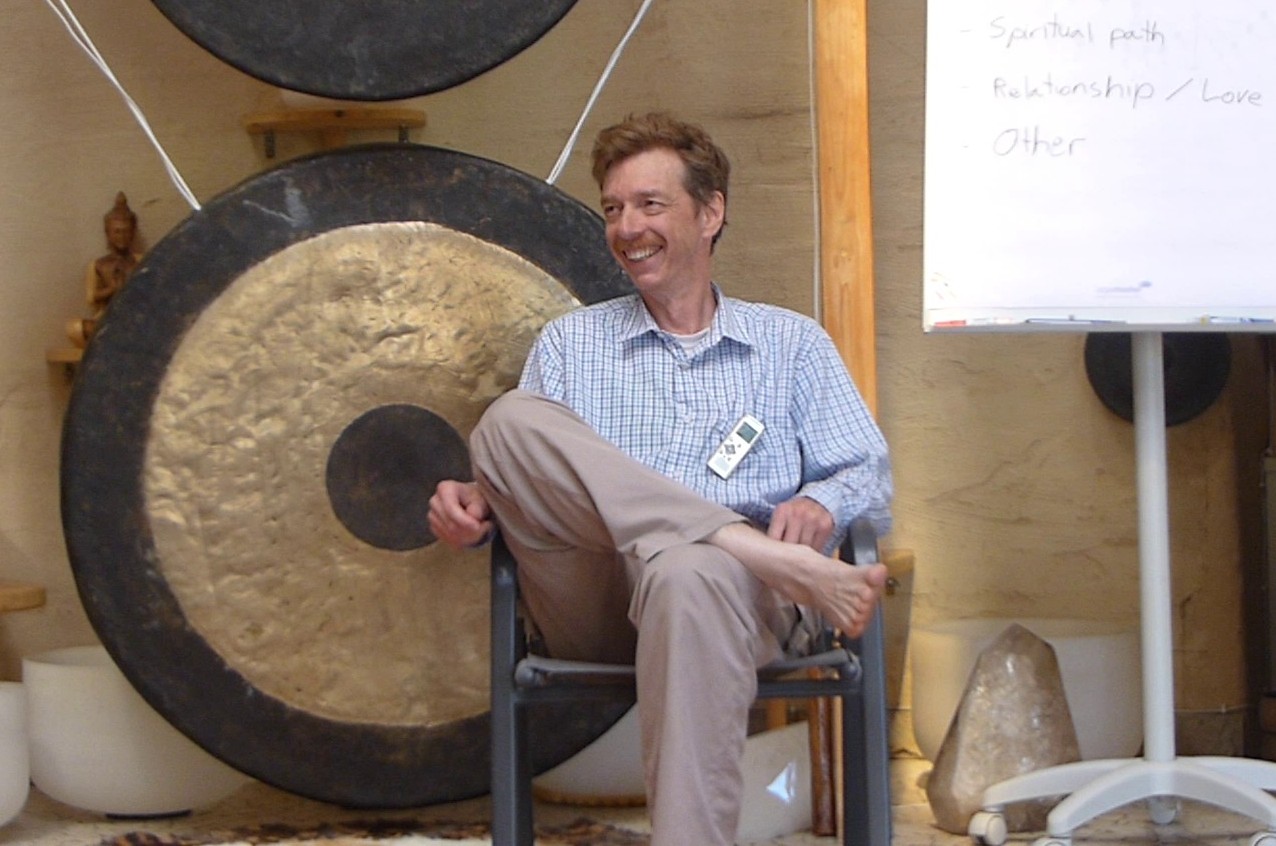